Mike Parry is a true Perth local. He was born in Subiaco and has lived in Perth his whole life, which he says “is a long time”. After starting out as a work experience kid in radio, Mike soon realised that radio was the industry he wanted to be in. 30 odd years later, Mike is still working in radio after finding a home here at the 6iX Osborne Park studios.

You might run into Mike out and about in Perth as he enjoys wining and dining “way too much”. Mike loves summer and regularly chases the sun to escape any winter blues, choosing to holiday in places such as Cairns or Broome.

Listening to Mike Parry from 2pm-7pm is a great way to spend your day. Not only do you get his famous quick wit and dry sense of humour, but you’ll find yourself enjoying 30-minute music marathons every hour, which Mike loves, because the marathons are full of great songs that remind him of when he was growing up. There’s also a Classic Countdown from 12pm each day which features 10 songs from the charts from a particular year. 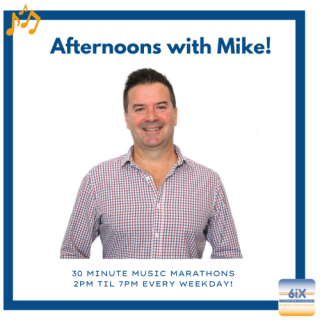